How to Master a (mini) Morning Routine 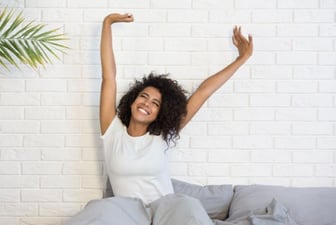 If you’re like me, you may have considered, or perhaps tried, becoming more of a morning person. While I aim to make an early bedtime more of a habit, it doesn’t always happen. To encourage more consistency, I’ve created three “sleep steps” to help me to wind down and transition into evening. This involves making a mug of tea, brushing my dog’s teeth (because oral health is important for all) and switching on a white noise machine. Random? Perhaps. Helpful? Yes. According to the National Sleep Foundation, establishing a consistent evening routine is part of good “sleep hygiene” which also includes other habits such as avoiding caffeine and limiting screen time.

So in my quest for becoming more of an early bird, I decided to explore the science behind morning routines and how to create one for myself.

What the science says

Studies show that establishing a morning routine may boost energy, lower stress levels and increase productivity. So where do we start? Like most changes, starting small is best. There are two critical building blocks to health habit formation. First, identify an action that you’d like to build into your morning routine, such as drinking an extra glass of water. Second, identify a time or a place, such as in the kitchen after making coffee. Then, each time you encounter that place or time, do the action. Over time, less energy will be dedicated to doing the action as it becomes more automated, with a fully fledged health habit established approximately 10 weeks later.

What worked well (and what didn’t)

After reading blogs, personal stories and research articles around habit formation and morning routines, I created my own. I chose three actions to include in what I thought was my new soon-to-be seamless morning routine. Since I’d been reading about the health benefits of journaling, I decided to include that along with walking my dog phone-free before doing some form of exercise for an undefined period of time (spoiler alert: always define the time).

Journaling: At first, it was awkward to journal. “What do I write about? Should there be some kind of structure to this?” Over time, I realized journaling could be anything -- what I did that day, how I felt, a haphazard list of goals/things I needed to do etc.. It felt good to take a few minutes to sit down with a pen and pretty notebook each morning.

Walking: Taking my dog sans phone allowed me to be fully present with him and my surroundings and reflect on the upcoming day. While not checking email or responding to texts first thing in the AM initially felt stressful, it became easier. After a few days, walking phone-free felt great and helped me start the day feeling refreshed.

Working out: Here is where everything started to go downhill. On the first few days, I managed to get to a morning hour-long class. On the other days, I said, “I don’t have that much time” so skipped exercising entirely. Reflecting back, I should’ve created more of a definition of “working out” that encompassed classes, stretching at home and running outside for even a short period of time that was realistic. I had to remind myself that 10 minutes is better than nothing!

After trialing this for about a week, I decided to continue the journaling and phone-free dog walking. Perhaps I’d taken on too much by trying to pack in too much into one morning. Becoming a morning exerciser is something I’m still working toward and may not have been a realistic goal at this point. Next step for you? Think about one or two small health habits to start incorporating into your morning routine.

Plan when and where will you do this.

Aim for consistency and don’t expect perfection. Establish small, realistic goals and be mindful that sometimes it won’t happen. And that’s ok.

Born in Tel Aviv and raised in Northern California in a primarily vegetarian household, Maya developed an interest in nutrition and health at a young age. After graduating with a Master's in Public Health, she moved to Chicago where she began her career as a Registered Dietitian Nutritionist in a clinical setting. In 2015, she established a nutrition and well-being consultancy, partnering with local organizations to help them cultivate a culture grounded in well-being through on-site nutrition services. She also works with a small subset of private weight management clients, helping them navigate nutrition while empowering them to develop healthy habits. As an animal lover, she volunteers at the Anti-Cruelty Society and loves exploring the city with her mini Aussie mix, Dexter.

Topics: Self Care Lifestyle
> Read More About this Topic