Daring to Dream with Robin Roberts and Telisa Yancy 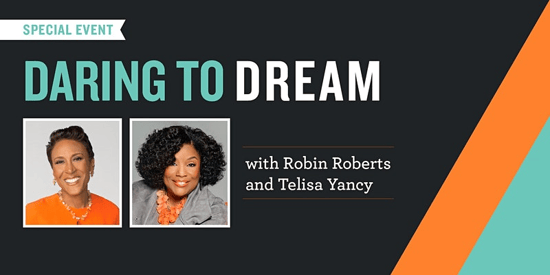 American Family Insurance's DreamBank is honored to bring together two women who embody the power of aspiration and inspiration.

In celebration of Women’s History Month, American Family Insurance’s DreamBank is honored to bring together two women who embody the power of aspiration and inspiration; Robin Roberts, co-anchor of ABC’s Good Morning America, and Telisa Yancy, chief operating officer of American Family Insurance. Join in as they share their perspectives on staying committed to your dreams, overcoming obstacles, remaining true to yourself and blazing trails that illuminate the path for others.

With over 30 years of broadcasting experience, Roberts has spent her career defying odds and creating opportunities for women in journalism. As a well-known anchor on ESPN's SportsCenter, she became the first woman in history to be a contributor on NFL PrimeTime. Roberts has also made a lasting impact during the last 16 years as the co-anchor of Good Morning America. Under her leadership, the broadcast has won numerous Emmy Awards for Outstanding Morning Program and the People's Choice Award for Favorite Daytime TV Hosting Team. She also founded her own production company, Rock'n Robin Productions.

Roberts solidified her spot in history when she was honored with the Walter Cronkite Award for Excellence in Journalism, inducted into both the Broadcasting & Cable Hall of Fame and the Sports Broadcasting Hall of Fame and named one of Glamour's Women of the Year. Her dedication to dependable journalism was further recognized when Reader’s Digest named her the most trusted person on television.

Similar to Roberts' tireless journey of dream pursuit, Yancy is a respected and acclaimed marketer in the industry. She's held numerous leadership positions within American Family Insurance, including the vice president of marketing and director of advertising, brand and media. Before joining American Family Insurance, she held marketing positions with Burger King Corporation, Ford Motor Company and Lincoln Mercury. Yancy is recognized in the business community as a creative, revolutionary thinker and transformational leader.

Join us for this dynamic dialogue between trailblazing dreamers, both champions of creating new opportunities for themselves and others, as they make history through their dream pursuits. Enjoy this incredible learning opportunity as Robin Roberts and Telisa Yancy share their experiences on breaking barriers, dreaming big and inspiring generations of women to come.