"You always gotta be your own YES." - Whitney Reynolds

Amanda and Alicia sit down with Whitney to discuss how she learned how to mixed southern charm with big city hustle to build the career of her dreams. Whitney combined her news background and passion for people to create The Whitney Reynolds Show, a show changing conversation for talk TV.

In this episode, you'll hear how Whitney used her own personal experience to create a career that provokes positive change through tough conversation and how manages her family life alongside her high profile career. 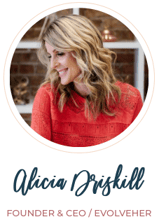 Alicia Driskill, Founder of EvolveHer, curates events and workshops that help women evolve and live a life they love. Prior to launching evolveHer, Alicia worked as VP of Global Partnerships at WME | IMG, one of the world’s most innovative companies. She also served as a Senior Executive at Live Nation and People.com. After a 17 yr career in entertainment & media working alongside the industry’s elite, Alicia decided to evolve her own career path and disrupt the Chicago market by opening EvolveHer, Chicago’s first creative workspace designed for women. Alicia also serves as an active Luminary Member of Step Up, a non-profit organization that helps girls fulfill their potential. Follow Alicia on Instagram and LinkedIn.

EvolveHer provides personalized tools, connections and resources to advance women in their careers and lives. Headquartered in Chicago, IL, EvolveHer's event loft was designed to inspire creativity and foster collaboration amongst women and has hosted 750 events since opening the doors in 2018.